From the Smithsonian Research Center of the ISHF

A recreated page within the International World Wide Web Digital Museum curated by Maryam A. Eshan Perez-Speranza, ISHF Director (Institute for Social & Historical Forecasts), in honor of the Smithsonian's newest holiday event: The Olive Tree—part of our ongoing exhibit about "Great Speeches That Changed The World."

Built with Posthaven
Theme based on Lanyon by @mdo

Excerpt from the book The Olive Tree: 12.25.2047, from the Acknowledgements page:

"The atmosphere of intolerance against Muslims during the 2016 presidential campaign reminded me of an old CBS Sunday Morning package by Bob Simon titled The Lemon Tree. It was the story of a children’s school in Israel that had once been the home of an Arab and a Jewish family, both sharing the burden and sadness of fifty years of war, as well as the fond memories of an old lemon tree that used to grow in the home’s backyard. I felt compelled to combat that atmosphere of religious intolerance with a dose of humanity through this work of fiction which was inspired by that school and its beloved lemon tree. Two years later, eleven people lost their lives in the deadliest anti-Semitic attack in US history, and I pondered the daunting question of whether to wait to hear back from my traditional submissions to agents and managers, etc., or to just self-publish in order to get the story out into the world. Although I was already in the middle of another project by that point, a short interview with Andy Weir (regarding his book The Martian) inspired me to release the e-book a few weeks before Christmas, at the lowest allowable price. May it serve the purpose for which it was written.
"But back in 2016, my first accomplices to that original plan were actually children. Specifically my 2016-2017 theater class at Hammocks Middle School. I am extremely grateful for their courage in attempting the first version of this story (although somewhat disastrously, but nonetheless fun) as part of our December 2016 school production. I am especially grateful to Taha, who played the part of the Arab patriarch, for showing me his love of Islam. I was able to give life to the Eshan family in the subsequent versions by seeing them through his eyes, and thus why the character of their son is named after him. I also want to thank Marvin and Ethan who literally saved the winter show at the last minute, and though not everything came out as planned, it was the first seed that eventually grew into this book. In truth, the entire cast and crew of that winter show (as well as the summer play) were absolutely amazing! I don’t want to risk forgetting someone, so I won’t name names, instead, I posted the entire cast list of the winter show here: smithsonian.ishf.info/ws. If any of you are reading this (and I hope you are), I want you to know that being your teacher for those eight months was an incredible experience that I will never forget. I will carry it in my heart forever." 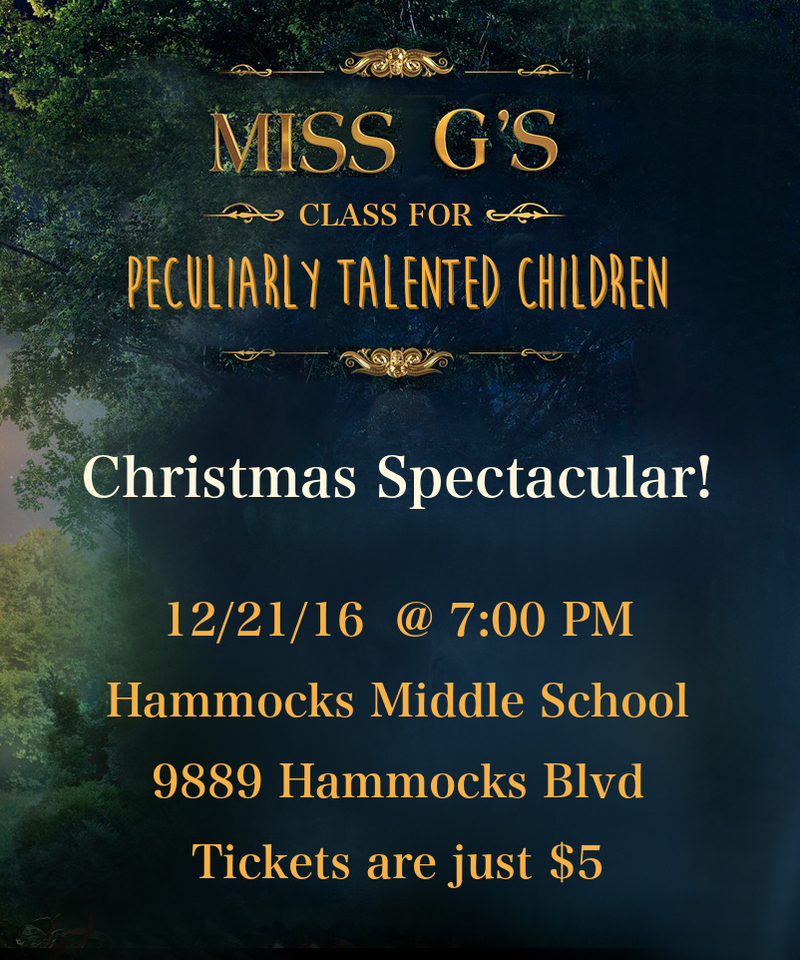 (because of privacy concerns, the photo that was part of this banner has been cut)

The main story was loosely based on the movie Miss Peregrine's Home for Peculiar Children.

Written together as a group, including (but not limited to): Andres Carbonell, Alissa Leon, Kimberly Medina, Joselyn Ugalde, Denise Santiago, Rebecca Vidal and Ms. G.

Loosely based on the movie “Freaky Friday.”

(*It was not a finished short story, but rather, a series of character exercises with some key dialogues, held together by research notes. I then enlisted the help of Vicky Vu, who was an incredibly talented young writer in her own right, as my script assistant. Some of the original character names differed from the book version.)

Choreographed by Alberto Peña created by Ms. G. for beginning Drama I students.

(This part of the story is supposed to represent the "dancing lights" that both Isaac and Aabi see as they sit together on one of the branches of the olive tree.)